Cyclocross equals pain!  That’s the only way I can describe it and those that have done it would agree!  If you’ve never done cyclocross (otherwise known as CX) or heard of it…well to sum it up take a bike similar to a road bike (skinny tires and all), a field of grass, mud, gravel (anything bumpy), weave a course through it, throw in a bunch of hurdles where you have to dismount your bike… jump over then jump back on your bike, surf through more mud, go as fast as you can with no rest or recovery zones, do the course approximately six times, hyperventilate for approximately an hour and well, you have cyclocross.

I don’t own a CX bike so the only two CX races I have done have been on my mountain bike.  This is essentially equivalent to trying to pull a sled of people over pavement…it’s a bit epic.  On October 6th, there was a local event called the Turkey CX and since it was only 20 minutes away from home, I just couldn’t pass up the opportunity to hyperventilate for a while.

Arriving at the race course at the Ancaster Fairgrounds, it was great to see a bunch of the mountain bike racers decked out on their CX bikes.  There were also a bunch of the road racers warming up, looking like they were in their element and ready to crush the field.

I knew the race was going to be harsh with the cold temperature and the gale force winds…but that’s what makes it a true CX race.    I find it hard to breathe in really cold temps and usually end up with a hoarse cough for a few days afterwards.  Feeling the wind cut through my pantyhose thick cycling attire and watching racers warming up in their winter coats and scarves was enough evidence that we were dealing with more of a frozen turkey CX.

I just love the honesty of people…that child like honesty where there are no filters…the saying it as one sees it honesty.  Removing my 29’er out of the car, a racer from the other side of the parking lot noticed my bike.  It’s obvious he felt obliged to come over.  He asked me if I was racing at the event? My answer, “yes!”  His brow furrowed and his non-subtle response, “but that’s a mountain bike! It’s going to be really hard on a mountain bike!”  I let out a chuckle and my response, “well what doesn’t kill ya makes ya stronger!”  He smiled and sarcasticaly replied, “Good Luck!”  He swiftly returned back to his car.  My thoughts were…”you’re lucky I’m not in your category!” and “Don’t make me ride over top of you!”  What a great way to get amped for a race!

Once I mummified myself  in my winter street clothing over my cycling gear, I headed out to the race course and did a few laps for a warm up with my friend Nathalie that also mountain bike races.  She too was on her CX bike and travelled like she had a hero tailwind pushing her along.  I wasn’t experiencing the hero tailwind, only the invisible sled of people attached to the back of my bike and I knew that I was going to be working hard in this race!

Sufficiently warmed up, I peeled off my warm and fuzzy layers and got in the line up for the start with all the other women.  Standing there, we all began to shiver as the wind blew through our nylon thin, non-wind resistant cycling apparel.  The consensus was we were turning into blocks of ice and were eager to get started. Learning of a delay after ten plus minutes in the frigid zone, we headed back out on the course to warm up the wooden stumps that use to resemble legs.

The announcement came for the final start and within two minutes we were cycling our way to anaerobic chaos.  It didn’t take long for me to fully experience the effort vs. return ratio as many of the women passed me.  I was giving a lot of effort…maximum heart rate…brain about to explode kind of effort in the first five minutes and the return for my investment was I was the turtle in a bunny rabbit race. 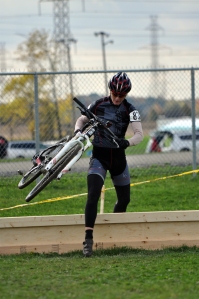 I pushed and hammered as much as I could.  My Garmin made it evident that I redlined my heart rate.  The first hurdle came and my dismount from my bike was smooth, the hurdle…not so much.  It was then that I quickly discovered that my left leg (my injured leg) does not lift as quickly as I was demanding it to.  Not that I was truly surprised considering I still walk with a limp, but I had hoped for more.  My foot grazed the edge of the hurdle and as I attempted to land on the other side, my left knee buckled and the front wheel hit the ground.  My right leg conveniently placed itself underneath my crank and I felt the sting of the teeth set into my leg.  Racing and hyperventilating make you ignore things, so I just hopped on my bike and kept going while making a mental note that my left leg is not on the same timeline with my brain.

After ten minutes in and only one lap done, all I could think was “holy shit, it’s only been ten minutes!”  Survival mode kicked in and my focus turned to the course…if I couldn’t go as fast as I had hoped, I would maximize the benefit of the bike on the corners.  This is a small consolation for essentially being the last one in the group.  I didn’t care if I came in dead last, I just wanted to finish without passing out or eating dirt on a hurdle. 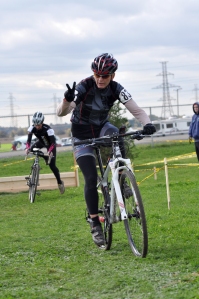 The thing about cyclocross is there is no settling in, no recovery, no forgiveness.  I’ve been use to mountain bike racing and taking advantage of the swoopy trails and speedy downhills where you can at least catch your breath.  I’m use to maxing out in mountain bike races but I do get to enjoying breathing on occasion.  This race didn’t give me any of that.  I could feel the colour of my face…beet red. My lungs felt like they reduced to the size of peas.  My inner dialogue became the Kelly Clarkson song…”What doesn’t kill ya makes ya stronger,” thanks to Mr. Honesty from the parking lot.  There were several moments that regardless of the current mantra , I wasn’t so sure this wasn’t going to kill me!

Heading into the second to last lap, my good friend Peter Kofman of Erace Cancer Cycling was coming up behind me.  I recognized his voice and knew that I was being lapped.  It is a humbling moment when other racers pass you.  I love seeing the strength in others and for a brief moment, pulled in behind him…if I couldn’t stay ahead of him well at least I could tag along.  After a minute I was seeing stars and accepted my fate…I had to ride alone! I shouted out some words of encouragement to Peter but they probably sounded more like I was talking under water, garbled and inaudible.  Then Mandy Dreyer, the leader in the Elite Women caught up to me.  All I could think was “Dang, I’m really worked!”  My fate secured its position as I watched her gazelle like skills as she jumped over a hurdle and disappeared into the distance and I was alone again. 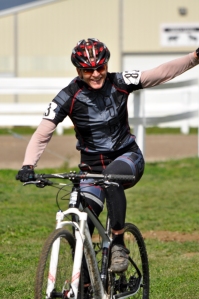 Round and round and round we go, where it stops…when you see the dude with the card that says “Finish!”  I could not have been more happy than the last stretch into the finish line and seeing the bright yellow card that I was done.  Sprinting with what I had left, which wasn’t much, I pulled into the group of women who had finished before me. My voice was raspy from the excessive breathing (or lack thereof) and I stammered out a few words..”Wow, that was really hard!”  It was the best I could come up with. 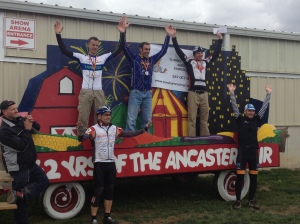 Erace Cancer does it again!

This race was the hardest thing I’ve done aerobically in a long time and I completely understood why others are doing it.  It definitely makes you stronger but it makes you want to die first! As I stood in the blistering wind, watching what looked like snow clouds moving in, I happily watched friends get their awards.  It didn’t take long for my mind to quickly forget about the suffering of the day and go to a place where only true sadists go.  No longer in pain, my mind wandered to the place that racers swear they’ll never go and look forward to the thing they swear they’ll never do again when experiencing moments of sheer suffering…when is the next race and when can I register!

As for the results, I have no idea where I finished.  I will find out eventually.  For the next CX race, I will try and up the ante…yes, on my mountain bike and will undoubtedly again, be one of the few people to be on such a machine for such a race.  Perhaps there will be some snow and my sled of people will give me a little less resistance! Bring it on!