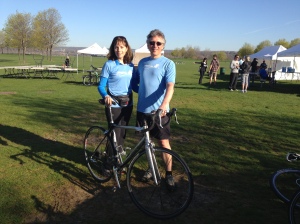 “Yes, Virginia there is a Santa Claus!”  This was my first thought when I arrived at the Annual Mike Ride.  In a age where it’s ‘fast’ everything and many have more of a ‘me first’ attitude instead of ‘we,’ this event was bringing back the ‘we’ to the world.  Blue skies and warm temps graced the event attended by young and elderly, experienced and casual cyclists.  All were attending to help in the mission of the Chamberlain family…to bring smiles to children’s faces and get people out on their bicycles…all in dedication to Mike, a son, brother, grandson, friend that lost his battle with mental illness 3 years ago. 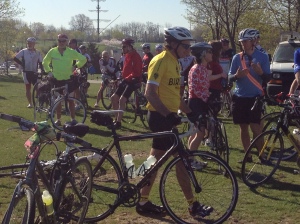 The Chamberlain family, out of the tragic loss of Mike, wanted to keep his spirit stay alive and do what is natural for them, make children grin from ear to ear.  This goal required help and they opened the doors to what I see as Santa’s workshop, of sorts!  With a  ‘more is merrier’ and ‘giving is better than taking’ attitude, they have invited everyone to participate in a way that will ultimately create a sac full (well more like a gymnasium) of bicycle presents.

You see, the funds that are raised at the family friendly event are used to purchase bikes and on a very magical day each year, this year it was April 24th, a school full of children and a parent were given bicycles and helmets.  It was truly Christmas day in spring. 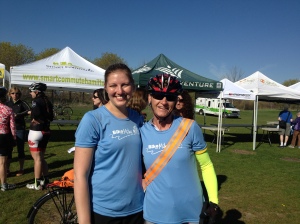 It was evident by the participants arriving at the event, that every person attending understood the family’s mission.  They wanted to share in the efforts to bring smiles on the faces of little ones in 2014, bring awareness to mental illness as well as show the city the need for safer roads for cyclists…something Mike believed in. 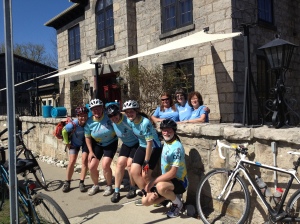 An incredible group that wanted to give back!

The ride started and finished at Bayfront Park in Hamilton, Ontario and included a 45 km, 20 km and 5 km ride with yummy food and live band to follow.  The courses followed the Bayfront on a nicely paved path and the longer distances lead to a bike friendly road route with the 45 km passing through Dundas; a quaint, bicycle friendly town.  With riders wearing ‘Bike for Mike’ shirts, it was a travelling advertisement to show the huge support for the event and that Mike was in the heart of every rider.

It was obvious that it was a very emotional day for the Chamberlain’s.  Tears and laughter flowed as friends arrived to support the family.  There was so much goodness that the Chamberlain’s were creating and they were excited to see the support but the pain from the loss of Mike was as fresh as if his passing had happened the day before.

I met the Chamberlain’s in 2012 through my role as an Ambassador for Freewheel Cycle.  I immediately felt like I was adopted into the family.  Their warmth and sincerity made me eager to support their cause and be proud to be one of ‘Santa’s’ helpers.  My role for the ride was to be the ‘sweep’ mechanic for the 45 km event.  Sweep means the very last person on the ride to ensure that no one gets left behind or lost.  It was a privilege to be able to help and get the opportunity to watch so much love and happiness pedalling along in front of me.

Raj and Jany…time for a great day.

Other helpers from Freewheel were Raj, the key man to helping the Chamberlain’s with the bike giveaway day by ensuring that all the bikes were received, built and safely transported to the donation location as well as the mid-pack mechanic for the 45 km ride.  There was also Braedyn and Andrew from the store who were neutral support for the 20 km event as well as Clive and Eric providing mechanical support at Domestique Cafe in Dundas.

Watching the mass of riders lead out ahead of me was a sight to see.  It was obvious that cycling brings out the kid in everyone even if the memories of childhood were in the distant past. I could hear the child-like excitement in their voices and saw their energy level rise in a fashion that only children or people pursuing a passion seem to display. It made me reflect on my childhood and how free I felt being on a bike.  I remembered the times when I was compelled, for no reason, to pedal as fast as I could until I couldn’t catch my breath.  Then there was the joy of coasting downhill with no hands on my handlebars, feeling the wind on my face and seeing how long I could stay upright.  There were also the times of silence, when it was just me and my bike, exploring and soaking in the sunshine with the air filled with the scent of spring.  The memories were flooding my brain and I was instantly reminded about the power of this two-wheeled, human-powered machine and how it changed my life.  I could see that the Chamberlain’s were, one school at a time, giving kids a chance to feel and build similar memories as I have and continue to do so to this day.

As the ride travelled along bike lanes, bike paths and beautiful country roads, there was constant enthusiasm that flowed.  Fingers pointed from side to side at the beauty of the landscape and heads glanced up to witness the whispy clouds randomly scattered against a perfectly blue sky.  With few mechanicals, the ride went on without a hitch and everyone succeeded in returning to Bayfront Park feeling revived.

Smiles and laughter filled the park as many stayed to enjoy the food, band and talk about how they were happy to help the Chamberlain’s, even though many did not know them.  These entrants were people that understood the power of the bicycle and were willing to help others have the opportunity to enjoy the same.  These were also people that understood the heartache caused by mental illness and they felt the Chamberlain’s pain.

Before I left the park, the Chamberlain’s shared a personal and fantastic story about Mike with me.  This story involved a gnome! Ultimately, a much larger gnome was involved and since the sizeable gnome could not be in more than one place at a time, a thousand pocket-size gnomes were designed for travelling.  I will leave it to the Chamberlains to share the whole story.  It expressed the amount of love the family had for Mike, how deeply wounded they are from his passing and how determined they are for his spirit and memory to live on.  You see, Mike loved to travel and a thousand little Mr. Gnomes could be in a thousand different places taking Mike everywhere that each and every person who beholds one of these special gnomes.

The power of the Gnome!

If you find one of these gnomes, the family just asks that you take it on your next trip and share its travels on their website Gorfnab.  This way, Mike will continue to see the world, through the kind acts of others and share in the adventures of many.  You can even see each location on the globe other Mr. Gnomes have been.  It is a great idea, filled with love.

I couldn’t hold back the tears as they told me the full story of Mr. Gnome.  I realized that they were giving me a gift…a personal piece of themselves and the awareness that you are never forgotten when you are loved.  I left the event a better person with a thousand reminders of what can be accomplished in life when it is done with the concept of ‘we’ instead of ‘me’.

If you want to give back to the community, help provide a bike for a needy child and help the city see the need for safer roads for cyclists, please consider coming out to the 2014 Annual Mike Ride or donate…all the information can be found here…Bike for Mike.

I can’t wait to be one of Santa’s helpers next year for Bike for Mike!  Now back to racing season and participating in something else I am extremely passionate about…racing for Erace Cancer Cycling Team and raising funds for Camp Oochigeas.  An ‘elf’s’ work is never done!