A new chapter of “the good ol’ days!” 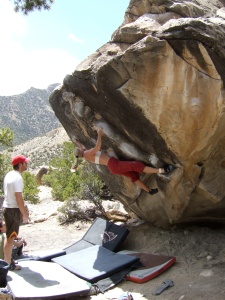 Climbing in Utah…back in the day!

“Ahhh….the good ol’ days!”  A statement I seem to be saying more often recently.  It is also a statement made by those with the privilege of getting older and still having the brain’s cruel capability to remember what it was like to be younger, stronger, more free, less crispy in the morning and when the ability to recover took 4 hours instead of the current 4 days!

As I am getting on in years…yes, heading towards that 50 mark and my body has been far from cooperative this summer, I found myself reflecting back on what I thought were the good ol’ days! 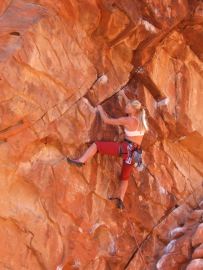 I remembered when I could climb more than one 5.13 in a day or ride my mountain bike for 8 hours and do it again the next day without feeling an ounce of fatigue. When I could party it up the night before and go for 20 km run the next morning!  When sleeping a full night was a common occurrence and physical pain was self-induced. I could go on and on. I’ll say this for the readers that are quite young, you won’t understand quite yet but you’ll get it when you’re older…rest assured! 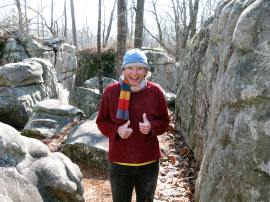 Fun days down in Horsepens in Alabama. 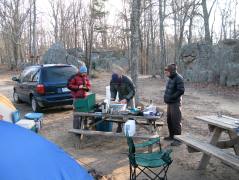 Hanging with one of our best climbing friends, Jay in Horsepens!

Looking back made me sad though.  I was thinking about what I once had as if my past was better than what I have now and it wasn’t, it was just different. It might take me four days to recover from any given adventure but I can see how much more I enjoy the little things in life.  There were things that I would miss back then since pressure to perform, be stronger, be faster, be whatever created a narrow focus and frustration. It impaired my vision to see what truly mattered, enjoying what I was doing, appreciating the fact that I was privileged to do it and building relationships with people that could last a lifetime. So what if I wake up feeling a little extra crispy and crunchy in the morning…I’m alive and that’s a damn good thing! 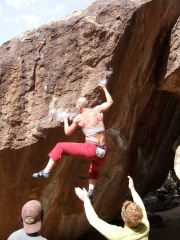 Getting my climb on in Hueco Tanks in Texas post chemo!

Being sad or frustrated with my situation doesn’t last long for me…I have my five minute rule and a rule that if I don’t like what I see, time to be creative and change it…so I did.  You see, I decided that there are chapters of ‘good ol’ days!’ There are good ol’ days of childhood, the teenage years, the 20 something years etc., basically the past.  Stupidity, maturity and all things of life in between create the good and the ‘what was I thinking’ days! I could see that even when I am 70 or 80 years old, I want to look back at my 40’s and 50’s and feel that even then were the good ol’ days!

So with my realization that I can create another chapter of ‘good ol’ days,’ even though the youthful body I once enjoyed is a little more stick-figure-like and requires a glass of wine or two after a day of adventure, I was going to do something I haven’t done in a long time…enter a climbing competition.  Yup, I know, WTF? (Now, I don’t have many indoor climbing pics so I’ve included stuff from my good ol’ days outdoors!) 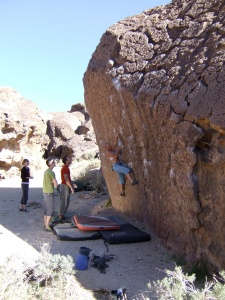 If you read my last post, you know I love to rock climb as well as ride my bike.  Competition is also in me and I’ve lost count of how many climbing comps I have done over the years.  Well I haven’t done one in a long time and even though I was out of condition for climbing comps and at least 20 years older than any other female competing along with the fact that they are all substantially thinner than me, I thought, “well hell, let’s go in and show ’em how grandma does it!”  So I signed up for the Summer Sweatfest at Climber’s Rock in Burlington, Ontario.

Entering into the Open (advanced category) was a must.  I’m weak and old(er) but entering into the recreational category would make me a sandbagger and I’ve never liked when sandbagger’s have entered an easier category just to win some booty.  Coming in dead last was a high probability for me but I didn’t care, I was out to have fun and I could do something most of the competitors wouldn’t be able to do…go home and have a beer afterward!  A perk of being older!!! 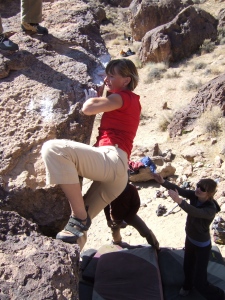 Bustin’ a move in Bishop, California!

As the climbing competition began I could see the range of female competitors and I knew I was about to get schooled!  They have been training for climbing and I’ve been well trained on a bike.  I wasn’t nervous though, I stopped being nervous at competitions years ago since it only made me want to puke and puking is not helpful for competition…maybe a little weight loss but it does nothing for performance.  Besides, it was exciting to watch climbers exercise incredible skill in a sport that stole my heart many years ago, do what I use to be able to do and see them feel the love for the activity that I have been doing for longer than they have been alive! Bragging rights!!!!

The first climb made me grunt, groan and scream with determination and it paid off after five attempts with a completion. I was slightly impressed with myself when I discovered that it was extremely difficult for many of the young ladies as well.  There is a little more “Grrrrr” in me for some difficult moves and a whole lotta “Grrrr” came out for this one climb.  Well that being said, that was most of my “Grrrr” and it was obvious that the youngsters had extra stamina and my tank was set on “drain!” 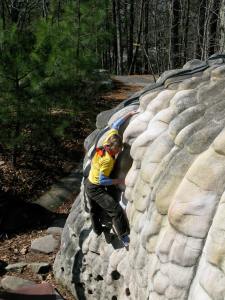 Groping the sloper in Horsepens in Alabama!

Knowing that my fitness for such herculean feats was in the ‘diminishing returns mode’ I began to sing and bust out some dance moves to the song “I’ve got the power!”  An old song by Snap.  I thought if I told my brain I’ve got the power, it would somehow magically create power in my untrained and aging body.  Liz from the gym passed by me and I sang it out loud to her.  She laughed and asked me if I did indeed have the power? I responded with a “let’s see?” I got onto the next problem and instantly my limbs felt like they were filled with lead and the brain communicating with the body short-circuited.  Falling off, I went back to Liz and sang, “I don’t got the powa!” 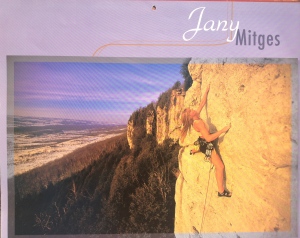 It was then that something very strange and surprising happened.  As I was enjoying the support of a solid wall to hold up my lead-laden limbs, one young female competitor approached me.  She looked nervous and put out her hand to shake mine.  I’m always stoked to meet new people so I extended my hand and said, “Hi, I’m JJ!” Then what came out of her mouth next was jaw-dropping for me.  Her eyes grew wide and she shook my hand with feverish speed.  With a huge smile she blurted out, “Oh my God, it is such an honour to meet you!  You are a legend! This is such a privilege to get to see you climb and shake your hand!” 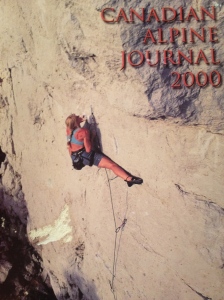 I had to look behind me thinking she must be referring to someone else.  Nope, there was no one else. A nervous laughter creeped out of me and all I could muster was, “wow, thanks but you must be confusing me for someone else!”  Her eyes grew wider and still shaking my hand, she said, “oh no, it’s you! You are a legend! Everyone knows you JJ. You’ve been around for forever!”  I couldn’t help but laugh and confirmed that she was right on her last statement and that it was such a compliment to be seen as a legend. She looked and sounded so excited to meet me, I was caught off-guard.  She thanked me for speaking with her and said I made her day.  I stood there confused and curious…how on earth could anyone think of me as a legend!

Feeling a little extra revived after my encounter, I attempted the other four climbs, coming reasonably close to completing a couple of them after multiple tries but my muscles were vibrating from fatigue during each effort.  My brain knew what to do and my muscles were trying to respond accordingly, but an empty tank is an empty tank and with age comes wisdom (sometimes) and listening to my body was key…keep pushing and get injured…then with perfect timing…I ran out of time.  Relieved that I was done, it was shocking that I placed 8th! 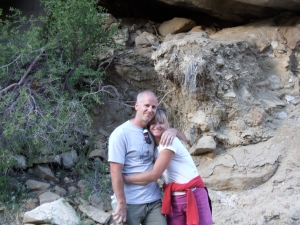 The greatest man I know!

Staying to watch and cheer on my husband and the remaining competitors as they tried their hardest, I felt completely content.  Competing is only a small portion of sport…the biggest part for me is being there cheering on and pushing competitors to find the best of themselves.  As my voice grew hoarse from screaming encouragement, I remembered back to one of my last competitions when the universe came together, made me weightless and I sent all four problems first try and won the competition against many strong women.  What I remembered clearly was the sound of the crowd as I climbed, they were screaming and jumping out of their seats as I sent.  The whole community gave me wings on that special day at Climber’s Rock.  I wanted to make sure that I shared my wings! 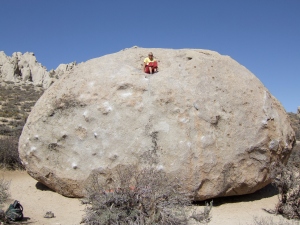 That was a good ol’ day and even though I wouldn’t be getting back that kind of good ol’ day I was now creating new ones by competing at this comp and achieving things that many think can’t be done at my age.  The good ol’ days are just that, they are good and they are old.  Each new adventure is the creation of a good ol’ day.  I’ve got a lot of them days and I’m looking forward to and hoping for many more years of life to create many more! 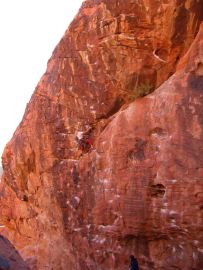 Climbing my way through life!

It took a friend to explain to me why someone would see me as a legend.  I’ve been in magazines, calendars, books and in the community for many years trying to achieve goals that weren’t as common for women.  After I got home, I reflected on what I was told and an ‘ah ha’ moment occurred.  I walked past a frame that was a gift. In it contained a picture of me from a climbing trip years ago.  Written on the frame, “A well-behaved woman rarely makes history!”  It donned on me, my friend was right…I’ve apparently made history and I am certainly that woman that is far from well-behaved! 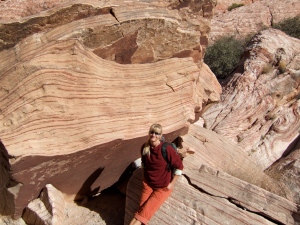 Enjoying every minute in Nevada!

I might not be able to be as strong as I once was or as those up-and-coming.  It is the reality of getting older and wanting to do more than one sport.  I had my days of feeling super-human but I’m not anywhere near giving up.  I can still climb, ride, compete and do something even better, I can do something incredible with all that I have learned from my good ol’ days…fully appreciate the drive in others, their want to be the best and give them the wings others gave to me, after all…isn’t that what legends do!

1 Response to A new chapter of “the good ol’ days!”